Visit for more related articles at The International Tinnitus Journal

Multiple Sclerosis (MS) is a chronic inflammatory and neurodegenerative disease of the Central Nervous System (CNS) characterized by the progressive destruction of myelin sheaths and axonal loss, typically presenting in the third and fourth decade of life [1]. The demyelination may affect different areas of brain and medulla and be responsible of different otolaryngologic symptoms including gustatory, olfactory, and audio-vestibular alterations [1].

MS may alter the olfactory and gustatory functions at both the functional and structural levels [2]; the neurological symptoms may vary depending on the brain region affected by demyelination. The olfactory function is altered in 15% to 45% of patients that suffer from MS [3,4], while taste is altered in only 4% of cases. The combination between olfactory and taste alterations is reported in nearly 19% of MS patient [5]. Based on self-report or cursory sensory testing, MS-related taste disorders have been assumed to be rare [6]; furthermore, patients reporting taste deficits typically have associated olfactory dysfunction, and may be inaccurate in recognizing true taste dysfunction when present. The smell dysfunction that could increase the taste alteration is progressive and slowly deteriorates over time [4,7,8] the increasing of smell dysfunction impacts taste also by increasing the symptom [4,5,9,10].

Olfactory, gustatory and audio-vestibular symptoms are often of temporary nature, probably because of the relapsing/remitting events that occur during the course of MS or following the use of corticosteroids that contrast the systemic inflammation generated by MS [15].

In this article, we report the case of a young woman presenting with a complete loss of taste that spontaneously resolved after two weeks, gradually followed by olfactory, audio-vestibular and neurological symptoms that led to a clinical diagnosis of MS.

A 32 years old woman was admitted to the Neurology Department of the Policlinico Umberto I, Sapienza University of Rome, referring the occurrence of a complete loss of taste (ageusia) nearly 3 months before admission with spontaneous resolution two weeks later. Ageusia was followed, about one week after its resolution, by hyposmia, dizziness and tinnitus in the absence of subjective hearing loss, and present at admission. One week before admission, the patient also experienced the loss of strength in the left side of the body and facial paraesthesia that led the patient to seek for medical help. In her medical history, she denied previous neurological disease and referred insulin resistance in treatment with metformin and hypothyroidism. After admission, the patient underwent a comprehensive neurological and otolaryngologic examination.

Otolaryngology examination including nasal endoscopy did not yield to any significant abnormalities. Tonal audiometry demonstrated bilateral normal hearing defined as an individual hearing threshold <25 dB HL at frequencies from 250 to 4,000 Hz at the octave scale in both ears according to the American Academy of Otolaryngology and American Council of Otolaryngology Figure 1. The measurement of the characteristics of tinnitus indicated a bilateral continuous non-pulsatile tinnitus with a frequency near 3000 Hz and an intensity of 20 dB. The Italian versions of the Tinnitus Handicap Inventory (THI) [16] and Hearing Handicap Inventory (HHI) [17] questionnaires were administered to the patients. THI score was 24; HHI score was 4. Somatic maneuvers were performed to evaluate the presence somatic tinnitus [18-22]; all maneuvers on the temporomandibular joint and head and neck did not induce a modulation of tinnitus pitch or loudness, thus excluding a somatosensory origin of tinnitus. 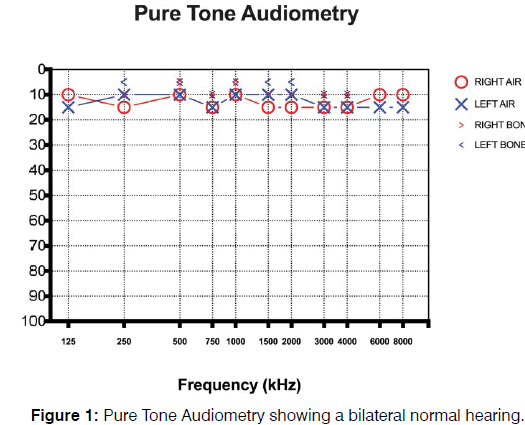 Distortion-product Otoacoustic Emissions (DPOAEs) were recorded and were consistent with audiometric findings Figure 2 although a bilateral decrease of DP intensity was recorded for frequencies between 4,358 and 5,188 Hz. 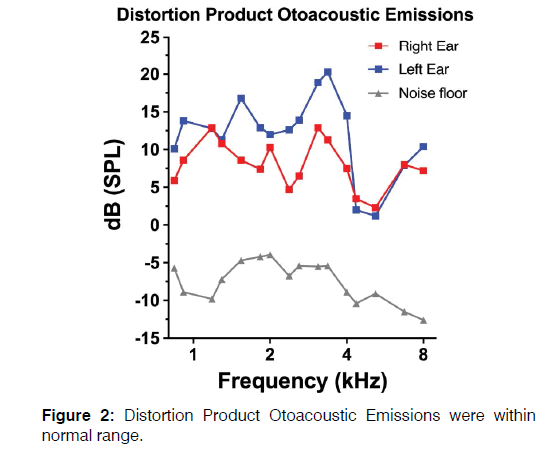 In the suspicion of a CNS disease, an MRI of the brain was performed, reveling the presence small areas of hyperintensity in FLAIR sequences in the periventricular space, in the semioval center and at the level of the corona radiata, compatible with multifocal leukoencephalopathy; similar alterations were observed in the left medium and lower cerebellar peduncles.

Due to clinical and radiologic features suggesting a demyelinating disease, the patients underwent a lumbar puncture. Cerebrospinal Fluid (CSF) analysis showed the presence of oligoclonal bands suggestive of MS.

A diagnosis of relapsing-remitting MS was made, and the patient started an immunomodulatory treatment with solumedrol. Associated symptoms promptly disappeared after the initiation of the treatment. No further relapses were observed for the subsequent 6 months.

Taste, olfactory and audio-vestibular alterations have been recognized as important presenting symptoms in various neurodegenerative and neuroinflammatory CNS conditions23 and have been reported in patients with MS.

The presence of gustatory alterations, as observed in our patient, represents an often underestimated condition in MS patients because of their rarity as presenting symptoms and because they are often associated to additional smell alterations that may confuse the identification of real true taste dysfunctions by the patients when present [24].

The impairment of taste perception had been reported in approximately 20% of MS patients [25] with elevated electrogustometric thresholds. Patients suffering from MS showed difficulties to identify tastants for all four classic taste qualities on both anterior (VII) and posterior regions of the tongue (IX); this loss of sensibility may be due to the involvement of superior taste pathways that influence taste quality more than perceived strength [25] Figure 3. 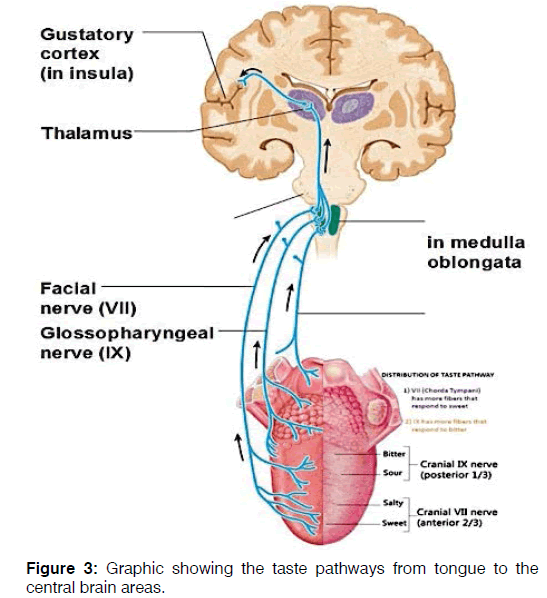 Figure 3: Graphic showing the taste pathways from tongue to the central brain areas.

Combarros et al. described the case of a patient lamenting transitory gustatory dysfunction that presented hyperintense, enhanced small lesion in the lateral part of the left midpontine tegmentum at MRI; this finding supports the hypothesis that unilateral pontine lesions may result in ipsilateral gustatory deficits and suggests that gustatory fibers ascend from the solitary nucleus in the medulla up to the homolateral pontine tegmentum without decussating26. In a different case, bilateral gustatory alteration has been reported in a patient with a unilateral small lesion, suggesting that the ascending gustatory fibers branch at the level of the lesion in the lower midbrain or in the more caudal part [9].

In our case, the patient presented a complete loss of taste lasting for two weeks with a spontaneous recovery. Ageusia was the only presenting symptom and was not associated with other symptoms, that instead appeared only several weeks later and led the patient to seek for neurological evaluation. In her MRI, areas of demyelination were identified in the semioval center and at the level of the corona radiata that may explain the alteration of taste; in fact, corona radiata in particular has been identified as responsible for taste alteration. The explanation of this phenomenon is linked to the pathways of the gustatory fibers that ascend contralaterally in the cerebral hemisphere and that then ascend from the thalamus to the cerebral cortex via the posterior part of corona radiata.

MS patients may present olfactory alterations that lead to odors misidentification and that are mainly present during the active phases of the disease. The MS olfactory dysfunctions are often associated to demyelination in the frontal and temporal lobes [7]. These findings suggest that smell impairment might be an effective indicator of disease progression due to the increasing in number of brain lesions, even in the presence of VEP within normal range [23].

The incidence of smell disorders in patients with MS is still controversial; percentages range from 15% to 45% in case control studies [27-31]. A worse olfactory threshold was observed in the early inflammatory phases while an identification score was more impaired in the widespread chronic disease. The presence of demyelinating plaques observed by MRI in the inferior frontal- and temporal temporallobe regions of patients affected from MS is correlated with altered smell abilities and olfactory dysfunctions. As in case of gustatory alterations, the olfactory dysfunction may be an indicator of disease progression due to the increasing of number of lesion or to the extension of demyelinating areas [32,33].

The mechanisms that link CNS inflammation and olfactory dysfunction are still poorly understood. The smell threshold alteration is considered as associated with the peripheral parts of the olfactory system, while odor discrimination is related to a central process by engaging several brain regions [23,24]. Therefore, in advanced stages of MS, the odor identification may be gradually impaired as the disease progresses in the CNS and may impair the neuronal network required for the processing of odor information [7]. Furthermore, the inflammation in the brain may also affect the peripheral portion of the olfactory system via humoral mechanisms such as cytokine release or antibody-mediated inflammation [7]. In our case, hyposmia was not a presenting symptom and was not associated to ageusia; in fact, its onset followed the spontaneous remission of taste alteration.

Audio-vestibular symptoms such as hearing loss, tinnitus and vertigo have been often reported in patients with MS. Audio-vestibular alterations, especially in young subjects, could represent an early sign of MS even when no demyelinated plaques are visible in the central nervous system [13].

Tinnitus in MS patients is most probably a consequence of hearing impairment that affects between 1% and 17% of MS patients and is commonly attributed to central nervous system demyelination [34]. Hearing loss and tinnitus may be the only presenting symptom of MS and may appear early in the course of the disease with good prognosis and little or no residual hearing deficit [13,15].

In the present case, tinnitus was not associated to clinically evident hearing loss; it has been previously reported that lesions affecting the auditory pathways may not determine an evident hearing loss in some cases [15]. Moreover, tinnitus and difficulties in speech perception, especially in noise, are often reported even in the absence of a clinically evident hearing loss [35,36]. Traditional theories assume that tinnitus is triggered by cochlear damage, mainly at the outer hair cell level; however, this would not apply to tinnitus patients presenting with a normal audiogram [36,37]. Recent findings have shown that normal hearing thresholds may also be found in patients with cochlear damage that predominantly affects specific structures, such as the inner hair cells, the auditory nerve fibers and the synapses between them [38,39]. An alteration of these cell populations, especially in the high-frequency region of the cochlea, may configure the presence of hidden hearing loss that cannot be recorded using the clinical audiometry [38-41].

Vertigo affects 7% to 30% of patients with MS and is mainly attributed to demyelination of the vestibular nuclei, musculoskeletal weakness, and ocular diseases [11]. The most typical vestibular sign in MS patients is multidirectional nystagmus without latency [42]; dizziness and disequilibrium may be also present, while acute vertigo episodes are rarer. In these cases, differential diagnosis with peripheral vestibular disorders is of paramount importance; clinical signs such as adaptation and fatigue of nystagmus, and instrumental tests such as vestibular evoked myogenic potentials may play a role for the differential diagnosis [42].

Recent evidences of the presence of macrophages in human temporal bones of patients with autoimmune disease supports the hypothesis that inflammation mechanisms in MS may also affect the inner ear leading to growing pathophysiological evidence of the involvement of the inner ear and vestibulocochlear nerve in hearing loss and vertigo in MS patients that may manifest with sudden sensorineural hearing loss and acute vertigo [43].

Audio-vestibular symptoms in young, neurologically normal subjects, especially when spontaneous recovery occurs, may represent an early sign of MS; it is therefore recommended to evaluate these subjects with clinical, radiological and electrophysiological test to exclude peripheral incipient MS [13,44].

In the present case, the presenting symptom of MS was a two-week long ageusia that spontaneously resolved without medical intervention. After its remission, ageusia was followed by other otolaryngologic symptoms such as olfactory and audio-vestibular alterations. These symptoms have been rarely reported, especially when simultaneous, in the early phase of MS and in young patients. A careful prompt investigation with clinical, radiological, and electrophysiological tests are recommended in patients with similar symptoms, especially in case of spontaneous recovery, as they may be presenting symptoms of a CNS disease such as an incipient MS. 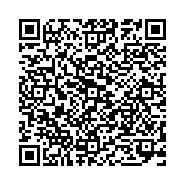 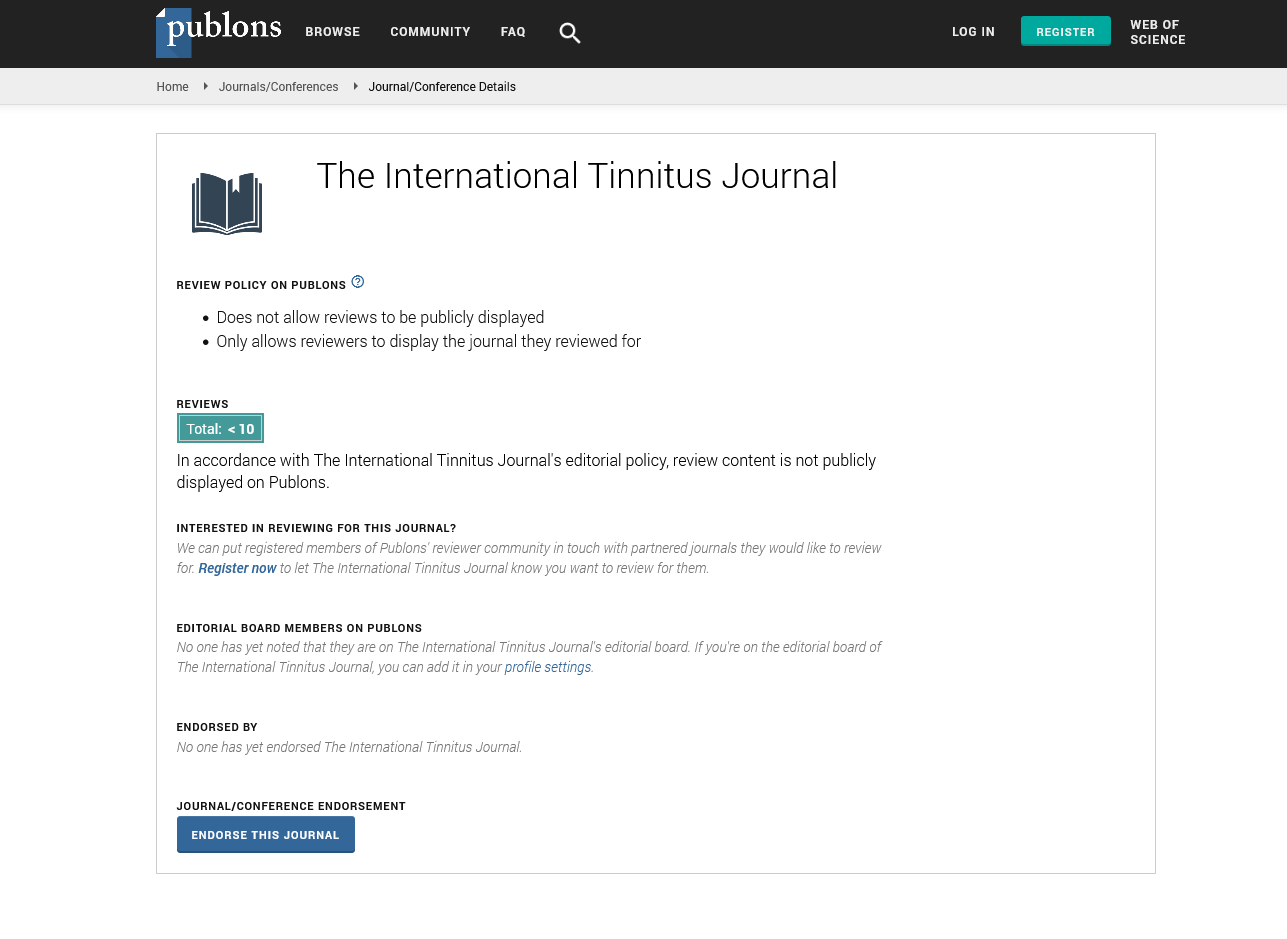