Celiac disease is an immune-mediated inflammatory enteropathy that affects about 1% of the world's population. Extra-intestinal manifestations are recognized, namely sensorineural hearing loss, which, although rare, may occur at pediatric ages. The case of a 12-year-old female patient with clinical signs of acute labyrinthitis concomitant to the diagnosis of celiac disease is presented. It is recognized that immuno-mediated diseases, of which celiac disease is an example, can affect the inner ear or the vestibular-cochlear nerve. There are several studies in the literature about the prevalence of sensorineural hearing losss in children with celiac disease, but to date there are no published cases of acute labyrinthitis in the context of this pathology at pediatric ages.

Celiac disease is an immune-mediated chronic inflammatory enteropathy. It is triggered by the ingestion of gluten, related to the interaction of antitransglutaminase antibodies with gliadin, leading to changes in the mucosa of the small intestine [1]. It affects about 1% of the world's population [2]. About 20-30% of patients may have extra-intestinal manifestations, including sensorineural hearing loss which, although rare, may occur even at pediatric ages [2-4].

Acute labyrinthitis is a rare clinical entity in children. It can be triggered by bacterial, viral, or immunemediated inflammatory processes [5]. We describe the case of a patient whose clinical picture may suggest an association between these two pathologies.

A previously healthy 12-year-old female patient, with a family history of celiac disease in a 9-yearold sibling, presented at the ENT clinic with leftsided hearing loss, tinnitus, vertigo and vomiting. At examination she had no fever, had normal otoscopy, hearing tests suggestive of left neurosensorial hearing loss, spontaneous horizontal-rotational nystagmus with rapid phase to the left and vestibular tests with left hypofunction. The remaining neurological examination was normal. The audiogram showed left severe sensorineural hearing loss, with normal thresholds on the right ear (Figure 1).

She carried out blood tests: values of haemogram, ionogram, renal and hepatic function within the reference parameters, negative PCR and negative viral serologies. Because of the family history of celiac disease – sibling - anti-transglutaminase antibodies were also requested in the blood tests, and it’s values were considerably high (340 IU/ml).

She underwent magnetic resonance imaging, which revealed contrast hypercaptation in the basal turn of the left cochlea, suggestive of an acute inflammatory process.

She was hospitalized with a diagnosis of acute labyrinthitis. Treatment included a bolus of methylprednisolone 80 mg, followed by intravenous dexamethasone (for its known antiemetic effect in the context of vertigo), valacyclovir and metoclopramide, and started hyperbaric oxygen therapy. The symptoms of dizziness improved at the end of the 4th day. On the 11th day, he was discharged with corticoid weaning and maintained hyperbaric oxygen therapy, having completed 20 sessions. She performed a duodenal biopsy in the outpatient clinic whose histological result was compatible with celiac disease.

She performed serial audiograms, following 6 months after discharge from hospital, without any auditory improvement (Figure 2). The patient maintains follow-up. 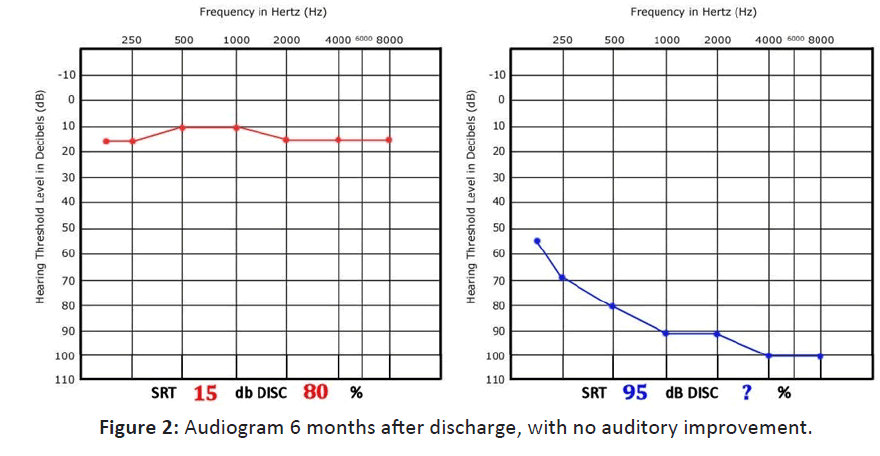 Figure 2: Audiogram 6 months after discharge, with no auditory improvement.

It is recognized that immune-mediated diseases, of which celiac disease is an example, may affect the inner ear or the vestibulocochlear nerve causing unilateral or bilateral hearing loss. This hearing loss can present as progressive or sudden hearing loss or as acute labyrinthitis [6,7]. Acute labyrinthitis manifests by sudden symptoms of sensorineural hearing loss and vertigo, and most often it is caused by a bacterial or viral infection. However, the literature describes cases of aseptic labyrinthitis, presuming an immune-mediated inflammatory reaction in its origin [5]. There are several mechanisms that may explain auditory damage in the context of immune mediation diseases: autoantibody lesions, immunocomplexes deposition or vasculitis phenomena with ischemia in the vestibulocochlear end organ6. In fact, autoantibodies directed to cochlear epitopes may be pathogenic in patients with a susceptibility to autoimmunity [8], and this susceptibility is present in patients with celiac disease[1].

Transglutaminase is found in various body tissues. In celiac disease, extra-intestinal manifestations can be explained by the infiltration of anti-transglutaminase antibodies and activated lymphocytes in various organs, namely in the central and peripheral nervous system and in terminal sensory organs such as the inner ear, triggering a local inflammatory reaction that can lead to sensorineural hearing loss [1,2,4].

In the present case, labyrinthitis occurred without clinical or analytical evidence of infection, in a patient diagnosed with celiac disease and positivity to anti-transglutaminase antibodies - which may indicate an immune etiology for labyrinthitis. However, it may have occurred independently of celiac disease, for example in the context of an overlapping viral infection. Some studies have shown a higher prevalence of sensorineural hearing loss in adults and also in children with celiac disease, possibly related to autoimmune phenomena [2-4,9]. Despite this, no cases were found in the literature of acute labyrinthitis in the context of this pathology at pediatric ages.

Hyperbaric oxygen therapy may be used as adjunctive therapy in cases of sensorineural hearing loss, although its contribution to hearing improvement has not yet been defined [10]. Although it is not a formal indication in cases of acute labyrinthitis, in this case, taking into account the age of the patient, it was decided to implement a maximum therapy in the attempt of auditory recovery.

Acute labyrinthitis alone rarely occurs in pediatric patients. In the present case, its occurrence in a patient with a simultaneous diagnosis of celiac disease has led us to assume an association between these two pathologies, based on the fact that celiac disease has extra-intestinal manifestations, and that lesion of vestibular-cochlear terminal organs can be due to autoimmune phenomena.

Authors having to conflicts of interest.