Acinic cell carcinoma (ACC) is a rarest form of low-grade malignant salivary neoplasm in which the predominant site is the parotid gland and women are usually more frequently diagnosed than men. Surgical excision is the main treatment of this malignant neoplasm. Other treatment modalities such as radiotherapy may be indicated in some cases. I present a case of 46 years lady who present with slowly enlarging right parotid mass and confirmed to be acinic cell carcinoma by pathology.

My patient, 46 years, Malay lady no known medical illness who presented to head and neck surgery clinic with right parotid swelling of a year duration, insidious in onset and progressive in nature. 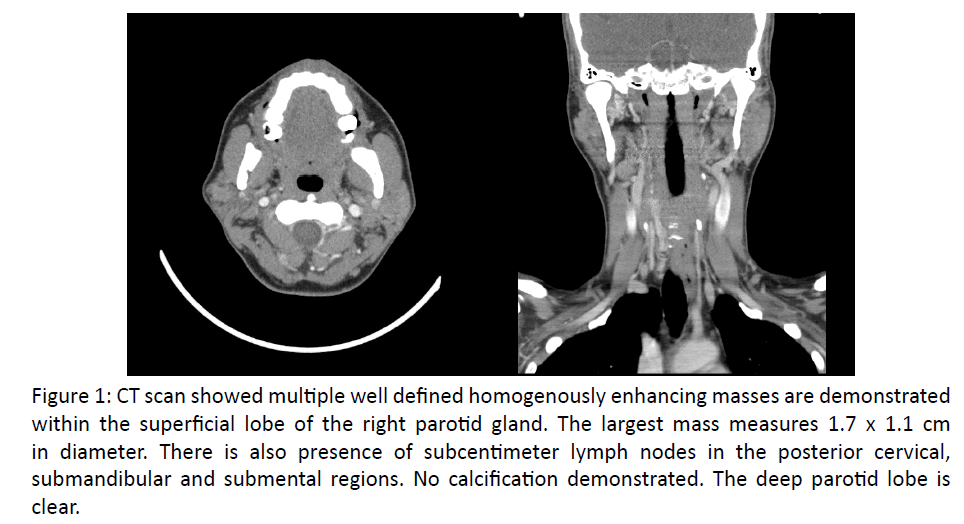 The post operative histopathological report revealed acinic cell carcinoma with margin of the cells clear. She is then follow-up by the oncology specialist and planned for radiotherapy.

I present with this, a case report where incidental results detected by histopathology examination with acinic cell carcinoma of the parotid gland which is a rare entity of parotid tumour. It was initially thought to be benign disease entity and Foote and Frazell [1,2] first coined it as a carcinoma in the early 1950s [1-3].

Most acinic cell carcinomas are low-grade and are associated with less aggressive growth and good survival rates (about 70% at 10 years) [4,5]. The female to male ratio is 1.5: 1 and the tumours usually occur in the fifth and sixth decades of life [3].

The cause of acinic cell carcinoma is unknown as little or no research has been done in this area [6,7]. Probably it has to do with multiple factors, including environmental and genetic. Possible causes that have been cited in the literature are: 1) a familial predisposition in parotid cancer, 2) chronic wood dust inhalation in certain individuals who develop minor salivary gland adenocarcinomas of the nasal and paranasal sinuses. Another possible carcinogen related cause is second-hand smoke. The potential causes listed are theoretical and anecdotal only. They have been implicated in other cancers, but not ACC specifically [7].

Presentation is usually with the common symptom of infra-auricular mass. Facial palsy or pain usually may not exist at the first time (Figure 2). 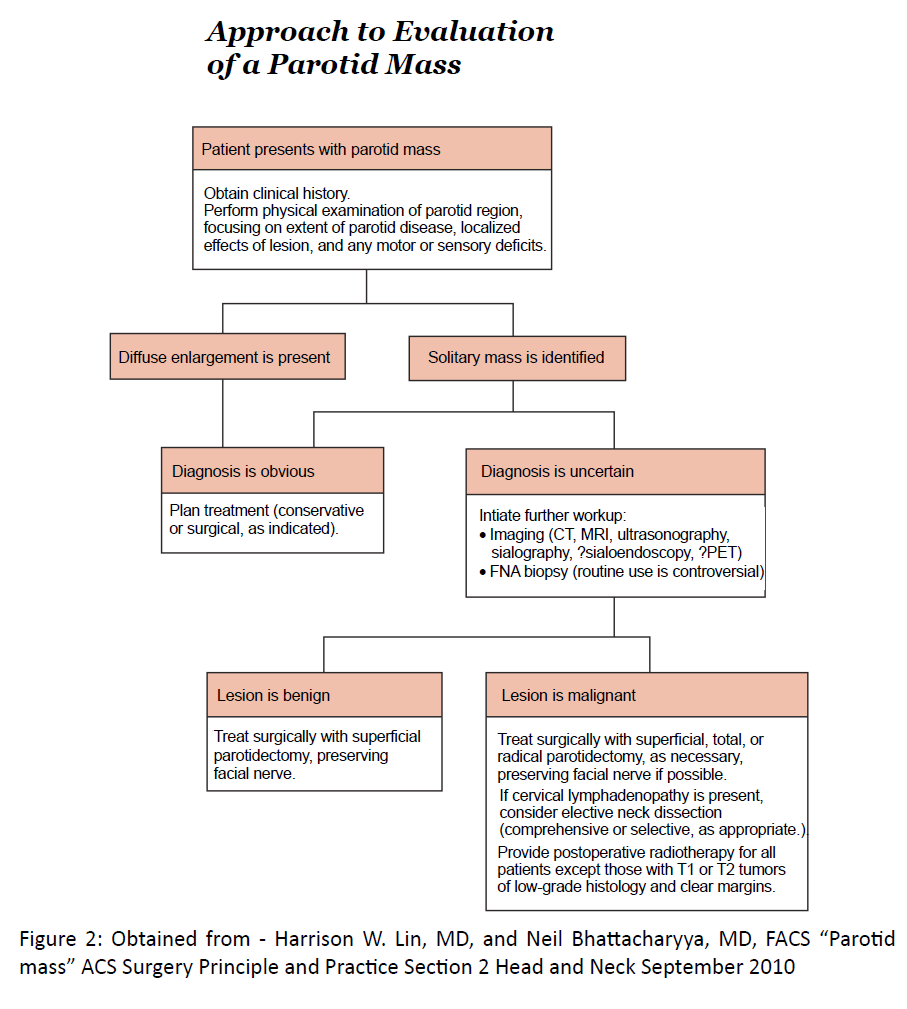 The possible differential diagnosis can be divided into non neoplastic and neoplastic conditions which include neoplastic lesions, congenital, vascular malformations, acute and chronic cervical lymphadenopathies and cystic lesions [8-10].

Radiological and cytological investigations may be beneficial in specifying this diagnosis.

Surgery is often the primary treatment which is the preferred method of treatment for salivary acinic cell carcinoma. However, it has not been established if removal of the entire gland is preferred or if it is better to attempt to remove only the cancerous tissue. Post-operative radiation therapy may be recommended to attempt to kill any cancer cells that may have been missed by the surgeon. Debate continues regarding the extent of resection needed, as well as the role for neck dissection and adjuvant radiotherapy [7,11,12].

In my case, a superficial parotidectomy was done. Patient was then subsequently referred for radiotherapy. Nevertheless, follow up of the patient did not show any mass, recurrence or metastasis. However, a further case studies and long term follow up is indicated for further documentation.

Acinic cell carcinoma is the low grade malignant salivary neoplasm rarely diagnosed in salivary gland which may be overlooked. The overall prognosis after the surgical resection depends on extent of lesion and adequacy of initial resection. Careful long term follow up protocol is advised in view of its malignant potential. It requires a high index of clinical suspicion, prompt diagnosis and definitive initial surgical treatment. If the condition is appropriately dealt with from the beginning, its morbidity is extremely low and permanent cure is highly probable.