Abernathy syndrome: A rare cause of pulmonary arterial hypertension.

Case history: Here we present 3 cases whose initial presentation were with PAH and did not have any associated cardiac abnormality on echocardiography. CT pulmonary angiography covering the upper abdomen was done in all cases and found to have Abernathy syndrome. We described features of Abernathy syndrome on CT angiography.

Conclusion: Abernathy syndrome is a rare but treatable cause of PAH and should be considered in all patients being investigated for PAH. Computed Tomography protocols may require to be altered to ensure the correct diagnosis.

Abernathy syndrome is a rare vascular malformation known as Congenital Extra-hepatic Portosystemic Shunt (CEPS) wherein, the portal venous system drains directly into the systemic vein bypassing the liver completely or partially. The phenomenon was first described by John Abernathy in 1793 [1] and further classified into two types by Morgan and Superina [2]. In Type I, there is a complete diversion of portal blood into the Inferior Vena Cava (IVC) or renal vein, with end to side communication. In this type, the liver is not perfused by portal blood at all. Type I is further divided into IA where Splenic Vein (SV) and Superior Mesenteric Vein (SMV) drain separately into systemic circulation and IB where SV and SMV join to form the Main Portal Vein (MPV) which drains into the systemic vein. In Type II, the MPV is intact, but some of the portal flow is diverted into the vena cava through side-to-side extrahepatic communication.

Early recognition of portosystemic shunts is important, to avoid detrimental effects of bypassing of liver on other organs. In the early course of the disease, symptoms are usually not liver-related and are often missed leading to delay in referral and diagnosis. Patients commonly present with hepatic parenchymal abnormalities such as nodular liver lesions, hepatoblastoma or hepatocellular carcinoma [3-5]. It may also be seen in association with congenital heart defects [1-3]. Late presentation with liver dysfunction, hepatopulmonary syndrome, hepatic encephalopathy or hyper-ammonemia can be life-threatening.

A 17-year male presented with shortness of breath and fatigue. Transthoracic echocardiography revealed features of PAH with no intra cardiac shunt. Multi-detectors Computed Tomography (MDCT) pulmonary angiography was performed to look for the cause of PAH and exclude underlying pulmonary thromboembolic disease. MDCT revealed two well-defined lesions in the liver with peripheral nodular enhancement in the portal phase and centripetal filling in the venous phase, suggestive of hemangioma. The intrahepatic portal vein and its branches were not visualized. Extra- hepatic portal vein drained directly into the Infra-hepatic IVC (end to end anastomosis) suggestive of Abernathy type IB malformation (Figures 1 and 2). 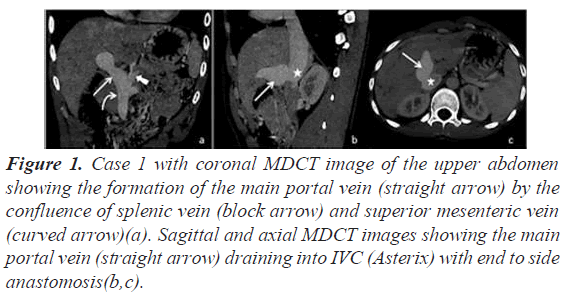 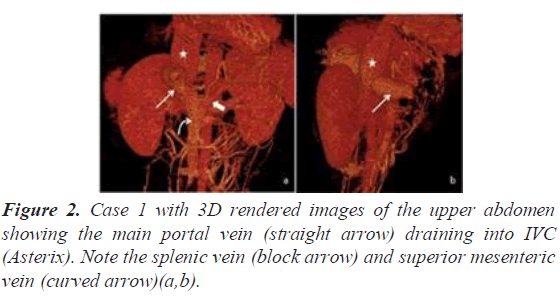 Our second case was that of a 14-year-old female who presented with recurrent episodes of respiratory tract infections. Echocardiography revealed features of PAH and on bubble contrast study, pulmonary Arterio-Venous (AV) fistulas were suspected. MDCT pulmonary angiography was advised for further assessment. MDCT showed a short portal vein with an end to side anastomosis with the left renal vein, indicating type IB Abernathy malformation (Figure 3). Multiple tortuous sub segmental pulmonary arteries and veins were communicating with each other in the extreme lung bases, in keeping with pulmonary AV fistulas. There were no liver lesions.

The third case was that of a five-year-old female child who presented with shortness of breath and cyanosis. Transthoracic echocardiography revealed features of PAH. Ultrasonography (USG) of the abdomen revealed portal vein anastomosis with the left renal vein. MDCT confirmed that the short main portal vein drained into the left renal vein (end to side anastomosis), in keeping with type IB Abernathy malformation. There was significant compression of the left renal vein in between the aorta and superior mesenteric artery (Figure 4). MDCT also revealed a well-defined enhancing lesion in segment II and III of the liver with retention of contrast in delayed phase and central non-enhancing area, suggestive of focal nodular hyperplasia. 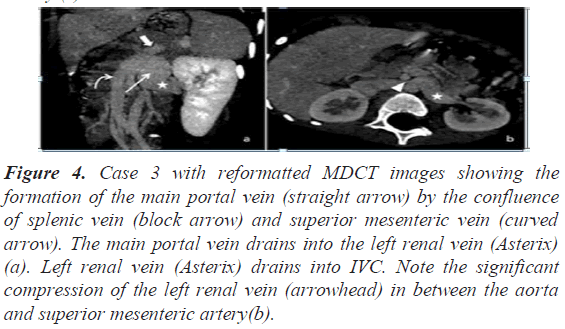 All our cases were managed medically as they were devoid of hepatic encephalopathy which is the indication for surgical intervention.

Abernathy malformation is an extremely rare vascular anomaly. The pathogenesis of type I Abernathy malformation is attributed to excessive involution of the periduodenal vitelline venous loop or due to total failure of the vitelline veins to establish the critical anastomoses with the hepatic sinusoids or umbilical veins. The resultant shunt may be due to the persistence of the right or the left vitelline [4,5].

Clinical presentation of this anomaly is broadly divided into three groups: symptoms related to abnormal hepatic development, those resulting from the portosystemic shunt, and those secondary to the associated congenital abnormalities. Patients with type I Abernathy malformation usually present in early ages with symptoms related to congenital heart disease whereas patients with type II Abernathy malformations present little later in life with symptoms either due to abnormal liver development or shunt related problems [5].

Treatment of Abernathy syndrome depends on the type of portosystemic shunt, encephalopathy, liver dysfunction and shunt ratio. In type I Abernathy syndrome, liver transplantation is the only definitive therapy as the intrahepatic portal venous system is not developed in this category of patients [6]. Usually the transplant is done when the patient develops symptoms of portosystemic encephalopathy. Shunt occlusion is the surgical treatment of choice for patients with type II Abernathy syndrome. Shunt occlusion can be done either by surgical ligation or interventional embolization [7].

All three of our patients were very young and presented with PAH related symptoms and they all had type I Abernathy malformation without any congenital heart defect. The pathological mechanism of developing PAH in these patients is attributed to vasoactive mediators like endothelin 1 formed in the splanchnic bed that bypasses liver metabolism to reach the pulmonary vascular bed. These mediators stimulate the synthesis of nitric oxide (NO) which in turn causes dilatation of pulmonary arteries and formation of small arteriovenous fistulas which in turn leads to the development of PAH [3,8].

Initial presentation of Abernathy syndrome with PAH is very rare and often goes unrecognized. Based on our experience, almost all patients with PAH on echocardiography (with no obvious cause), undergo MDCT pulmonary angiography to establish the cause. In all such patients, we ensure that the area of coverage is extended inferiorly to include the entire kidney. Specific attention is always paid to ensure normal appearances of the liver and the anatomy of the portal and systemic venous system. Adolescents who present with AV fistulas should also get their portal venous system assessed to pick this anomaly.

Abernathy syndrome is a rare form of extrahepatic portosystemic venous communication. In some cases, patients may only present with features of PAH. Therefore, this entity should be considered in the differential diagnosis of patients being investigated for PAH with no apparent cause. MDCT scanning protocols will require modification to ensure an accurate diagnosis.