A Study of the Development of Lexical Processing In Children- Ministry of Health-sur Hospital, Sultanate of Oman

Language has been defined by American Speech- Language-Hearing Association (Committee on Language, 1983) [1-8] as a complex and dynamic system of conventional symbols that is used in various modes for thought and communication, the ability to learn a language is innate. According to the innate universal grammar propounded by Chomsky (1965) phonology and grammatical aspects of language are innately coded and common to all languages whereas semantics and pragmatics are learnt. According to Bowen (1978),”semantics is concerned with the relationship of language form to our perceptions of objects, events and relationships or to cognition and thought”. The semantic aspects of language learning are studied quantitatively by studying the development of size and variety of vocabulary and qualitatively by the study of the aspects involved in naming of referents and concepts. The development of lexicon is sub served by the underlying memory and cognitive processes which form connections between words, referents and their properties. New words are introduced in the lexicon by associating them to concepts by the principle of mutual exclusivity (Markmen et al, 2003).The relationship between the development of word meaning and development of memory has been explained based on the concept of "mental lexicon". It explains the memory process involved in the recognition of a word. A lexicon has been defined as mental encyclopedia, which includes not just a word, but all general and specific information’s, both linguistic and non-linguistic aspects of that word. It has been postulated that there are two aspects underlying the recognition of a word. One is, the stored mental representation, and the other is, the retrieval system, known as lexical processing, which is also termed as lexical accessing.

The lexical processing involves a complex array of mecha nisms namely, encoding, search and retrieval, whereas, mental representation is the stored information about a lexicon [1,2] (Granham, 1985 and Emmorey and Fromkin, 1988).The mental lexicon includes information about pronunciation, linkages between words and words, words and concepts and, concepts and concepts (McCormick and Schiefelbush, 1984).The nature of mental representation in the mental lexicon is speculated from analyzing the levels of lexical processing. The qualitative developmental change in word meaning has been studied in both pre-schoolers and school going Children using various kinds of lexical paradigms such as, confrontation naming of pictures, word association, word definition, openended question, word recall, semantic description, giving members belonging to a category and rhyming task. Most authors (Caroll, 2004; Johnson et al, 1996) agree that the basic steps involved in lexical acces begin at the conceptual level where the concept is selected from a variety of choices in the mental lexicon and through a sequential process end in the verbal production of the word associated with the concept. The levels of lexical processing is observerd is different from children and adults (Tulving, 1972 and Petrey, 1977) (Graphs A and B).

Aim of the study: The aimof the study is to understand the development of lexical processing in in Arabic speaking normal children in the age range of 5 to 10 years.

Hypothesis: The study was carried out to verify the following hypothesis.

1) There is no significant difference in latency and accuracy of lexical processing between children across age groups and adults.

b) For category naming to single word presented.

c) For category naming to set of words.

2) There is no significant difference in latency and accuracy between genders within each age group. 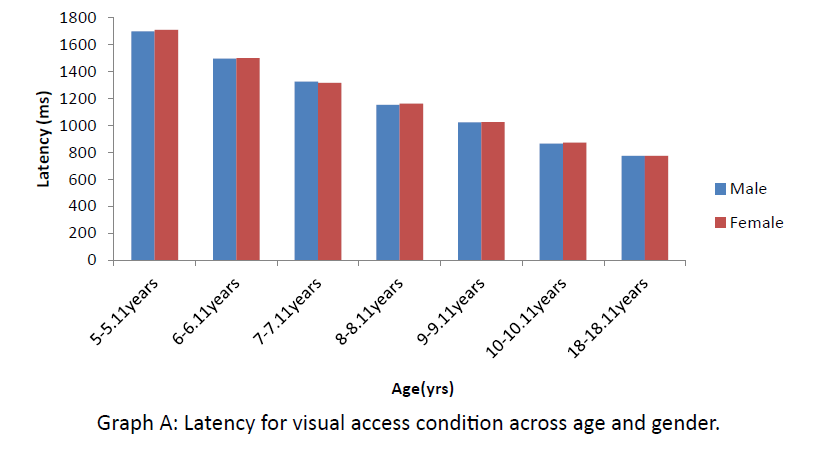 Graph A: Latency for visual access condition across age and gender. 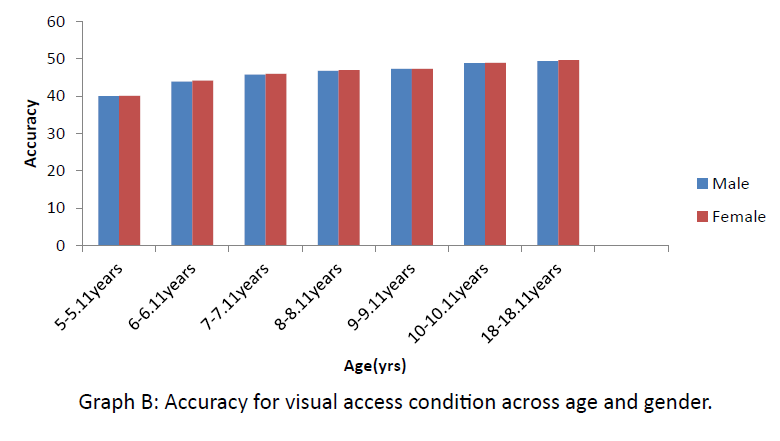 Graph B: Accuracy for visual access condition across age and gender

Instrumentation: A Laptop running on windows 7 operating system with DmDx software was used in the study to record the participant responses.

The purpose of the study was to investigate the development of lexical processing in children.

Results indicated that the latency difference was significant across all the age groups and adult group had shortest latency 874.06 ms, followed by children. It was also found that the latency decreased as the age advanced. Similar to latency, accuracy has shown decrease in variability with age and the accuracy has increased with age in the subjects studied. This increase in performance in accuracy can be the same reason reported by Dempster (1993) which states that with advancing age children increasingly are able to better inhibit irrelevancy.

It was also found that the latency was decreased as the age increased. However, no significant difference was noticed in latency of category naming to single words condition across gender. Thus, the hypothesis stating that there is no significant difference between children and adult for latency of category naming to single word task has been rejected. Nelson (1978) has speculated based on the action/function type of response to both basic level term and category term that, the functional aspect forms the basis for the formation of semantic categories.

From the analysis of the data the following conclusions are drawn.

1. Accuracy and latency performance depend on age and they found to be inversely related. This means, as the age advances, more words are retrieved with greater speed.

2. The development of lexical processing is a smooth progression from episodic level to young children to semantic level in older children and adults.