Adenoid cystic carcinoma (ACC) is a rare epithelial tumour entity and comprises about 1% of all malignant tumours of the oral and maxillofacial region [1]. ACC, first described as ‘‘cylindroma’’ by Billroth [2], is commonly classified with the salivary gland tumours, although it may arise in any site where mucous glands exist. Half of these tumours occur in glandular areas other than the major salivary glands, principally in the hard palate, but they also arise in the tongue and in other areas that are the sites of minor salivary glands [3,4]. Unusual locations include the external auditory canal, nasopharynx, lacrimal glands, breast, vulva, oesophagus, cervix, and Cowper glands. The long natural history of this tumour, its propensity for perineural invasion, and its tendency for local recurrence are well known4. Although it presents a widespread age distribution, peak incidence occurs predominantly among women, between the 5th and 6th decades of life [5]. It is a slow growing but highly invasive cancer with a high recurrence rate. Lymphatic spread to the local lymph nodes is rare. Haematogenous spread, however, occurs often in the course of the disease [6]. Perineural spread of ACC has long been recognized. The literature revealed the region of Gasserian ganglion to be the most common site of involvement (35.8%) [7-9] The 5 year survival rate is high but local recurrence rate is equally high [10]. We report a case of adenoid cystic carcinoma of the external auditory canal with emphasis on the features that distinguish it from benign lesions, the surgical aspects of therapy and review the medical literature existing in relationship with this pathology.

A 42 year old male presented with complaints of sharp pain in the left ear, radiating to the neck for 6 months. He also had decreased hearing on the same side and left ear discharge which was occasionally blood-stained. On examination, a smooth pink swelling was seen in the left external auditory canal, which blocked the canal lumen completely. The swelling was seen to arise from the posterior canal wall. Biopsy of the swelling was performed. Histopathological examination was suggestive of adenoid cystic carcinoma. Computed Tomography scan of temporal bone were done (Figure 1). 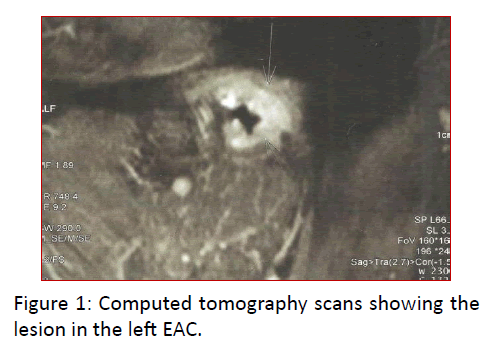 The tumor was classified as a stage 1 (T1N0) lesion based on University of Pittsburgh TNM staging for EAC carcinoma [11]. The patient underwent left lateral temporal bone resection. An enblock excision of the bony and cartilaginous canal was carried out. Initially an intact bridge mastoidectomy was done and facial nerve exposed. Facial recess opening was extended inferiorly to hypotympanum till the level of stylomastoid foramen. Mastoidectomy was extended superiorly to the root of zygoma (Figure 2). 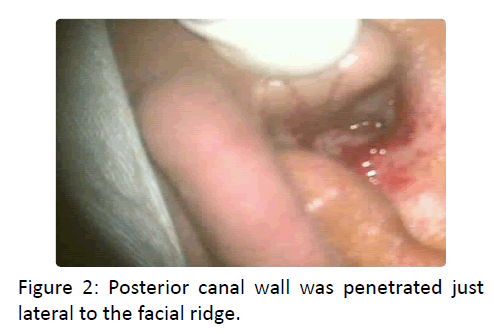 Posterior canal wall was penetrated just lateral to the facial ridge. Specimen consisting of the osseous and cartilaginous canal wall, lateral to tympanic membrane, along with a cuff of parotid tissue was removed intoto.

On histopathological examination cells were found to be arranged in a cribriform glandular pattern and focal perineural invasion was also noted. No sign of recurrence has been observed with a follow up of 2 years (Figures 3-5). 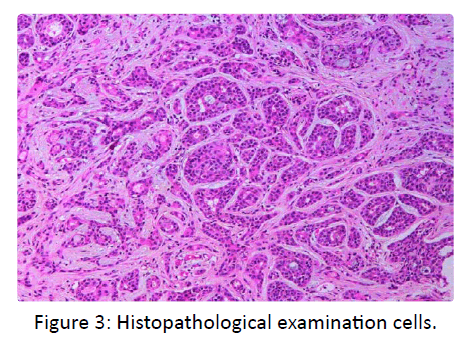 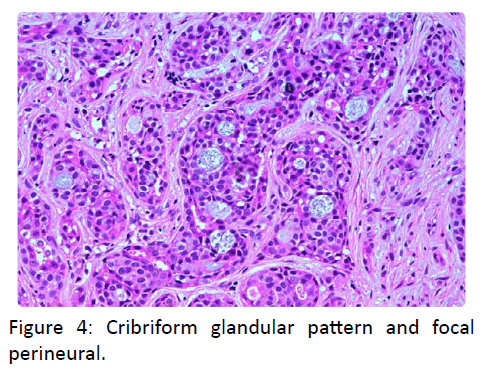 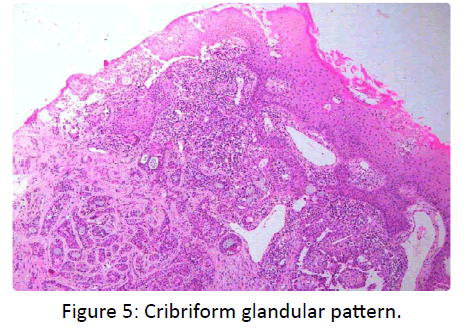 Adenoid Cystic Carcinomas (ACC) may involve the External Auditory Canal (EAC). Glandular tumors of the EAC are rare but ACC is the most common type of these rare glandular tumors. ACC appears to arise from the ceruminous glands, sweat glands or ectopic salivary gland tissue [12]. In some cases, the tumor may have arisen in the adjacent parotid salivary gland and secondarily may have extended into the ear canal [13]. ACC originating from the EAC appear to be more aggressive. Adenoid cystic carcinoma of the external auditory canal is usually seen in the 40- 50 year age group. A characteristic feature of this neoplasm? Is the presence of a sharp pain radiating away from the ear and an EAC lesion. The EAC lesion may present as a polyp, ulceration, and granulation or simply as a sub epithelial swelling. It may not be possible to clearly demarcate the borders of the swelling. Other symptoms include facial paresis, tinnitus and hearing loss. It is important to assess the nasopharynx to rule out tumor arising from that area and then spreading to EAC. The tumor may sometimes spread to the EAC from the parotid. High resolution Computed Tomography (HRCT) of the temporal bone is the imaging of choice. Evidence of irregular bone erosion or destruction of the canal wall is indicative of malignancy. ACC may locally invade soft tissue and bone, extend into the parotid gland and temporomandibular joint and metastasize to the regional lymph nodes, lung and liver. So lungs and regional lymph nodes must also be evaluated with CT for metastasis. A tumor of stage 1 requires a lateral temporal bone resection. Other stages require subtotal to total temporal bone resection. Stage 3 & stage 4 tumors also require postoperative radiotherapy. Adjuvant radiotherapy may also be given in cases of incomplete excision or in the presence of inadequate margins. Radiotherapy and chemotherapy are not curative but can help in palliation and as adjuvant therapy. ACC has a propensity for recurrence, so patients treated need to be followed up for a long time. The presence of tumor along the margins of resection, perineural spread, involvement of parotid or the involvement of bone increases the chance for recurrence. Histologically three main patterns of ACC have been described: tubular, cribriform and solid [12]. In the EAC significant correlation between histological patterns and prognosis has not been demonstrated because of the small number of cases. However in salivary glands prognosis of ACC correlates with the histological pattern [12,14] Predominantly tubular ACCs have the best prognosis, whereas the predominantly solid ACCs have the worst prognosis. These neoplasms are characterized by the presence of nerve sheath and lymphatic invasion. There is also perineural or periosteal extension. Histological differential diagnosis of ACC should include basal cell carcinoma, ceruminous gland adenocarcinoma and ceruminous gland adenoma. And it may be difficult to differentiate from an adenoma or a benign mixed tumour arising in ceruminous glands from small sample biopsies [15].

ACC of the EAC is a rare malignant tumour. This tumour has an aggressive behaviour characterized by local invasiveness and a metastatic risk of approximately 30%. We would therefore like to emphasize the need for early detection of adenoid cystic carcinoma of the external auditory meatus? Its differentiation from other benign conditions? The necessity of radical surgery and the need for long