A Case of Epistaxis ? Hemangioma of Nose

Hemangioma of nose is rare clinical entity .This poster is to report a case of such nasal hemangioma in a 42 yr old female which presented with epistaxis of 1 month duration. The diagnosis was made on HPE, CT angiography showing anterior ethmoidal artery and sphenopalatine artery as its feeders.

42 years old female presented to the Out Patient department with chief complaints of bleeding from right nasal cavity since 1 week which is sudden, intermittent and profuse. Past history revealed similar complaints which subsided on medication. 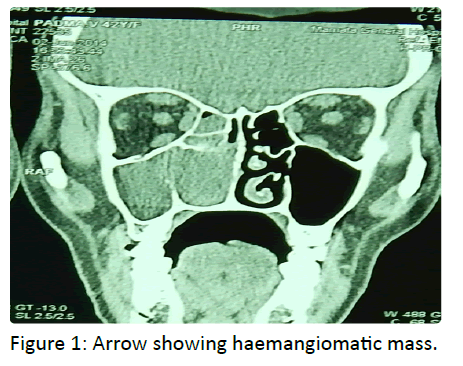 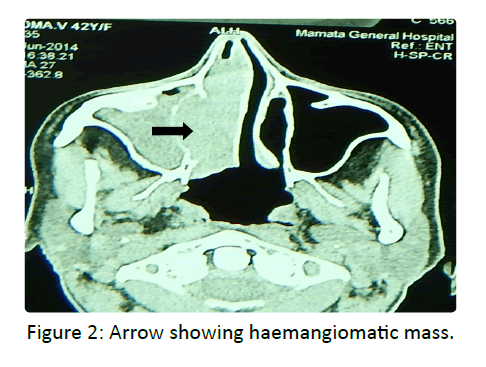 The patient was managed with anterior nasal packings, pro coagulants, parenteral iron therapy and two blood transfusions. Initially Hb was 5.3 gm% at the time of admission, which was improved to 10.8 gm%. 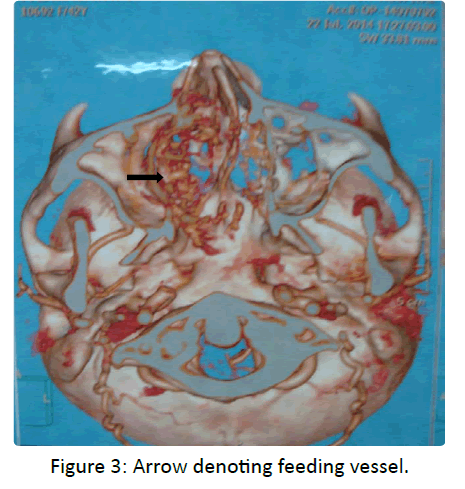 Angiography revealed it to be a heamangioma. As embolisation techniques are not available the patient was referred to higher centre.

Haemangiomas are benign vascular tumors, which originate in the skin, mucosae and deep structures such as bones, muscles and glands. Vascular lesions are divided into hemangiomas and vascular or lymphatic malformations. The International Society for the Study of Vascular Anomalies has defined hemangioma as a benign vascular tumor [3]. The main difference between hemangiomas and vascular malformations is increased cell turnover in hemangioma. It has been reported that over 20% of the benign nonepithelial tumors involving the nasal cavity, paranasal sinuses and nasopharynx are capillary hemangiomas and those originating in the turbinates mucosa are often cavernous, with tendency to grow in a lateral direction [4]. This vascular tumor has a slow course with a tendency to destruction due to its compressive effect.

In the present case-report bone remodeling with resorption and demineralization was seen indicating the compressive effect of the growth.

Epistaxis is a common symptom and recurrent nasal bleeding requires precise clarification of the cause and exclusion diagnostics prior to therapy planning. It is important here to distinguish between locally induced bland epistaxis and symptomatic epistaxis [5].